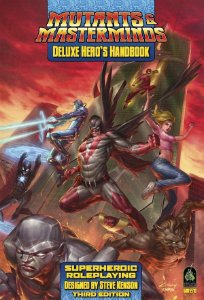 ly into super-heroic battle with Mutants & Masterminds! You and your friends take on the roles of super-powered heroes in a world of criminal masterminds, paranormal terrorists, destructive brutes, and other insidious villains. You get to thwart their evil plans and bring them to justice!

Since 2002, Mutants & Masterminds has earned its title as the World's Greatest Superhero RPG, inspiring countless game sessions and winning many awards for excellence. The Deluxe Hero's Handbook is the revised and expanded core rulebook of the game's Third Edition and it gives you everything you need to have your own super-heroic adventures:

So what are you waiting for? Choose your powers. Put on your mask. Fight the forces of evil and... Save the world!