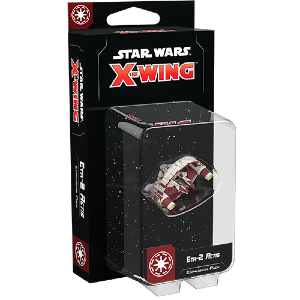 "As the Clone Wars takes its toll on the ranks of the Jedi Order, those that remain must assume even greater responsibilities in the Grand Army of the Republic. The Eta-2 Actis-class Interceptor, developed by Kuat Systems Engineering, is stripped down so that battle hardened Jedi pilots can get the most out of its agile frame.

"This expansion puts one of these agile ships as well as a Syliure-class Hyperspace Ring in your hands. Meanwhile, six ship cards offer an array of the galaxy's most notable Jedi Knights to fly it into battle and six upgrade cards invite you to customize the ship with a new astromech, additional Force abilities, and more!"