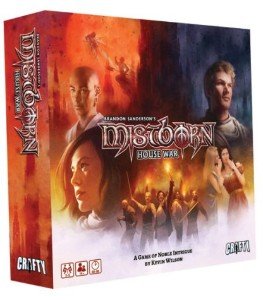 Dive into a world of noble intrigue and treachery with Mistborn: House War, the first board game set in the world of Brandon Sanderson’s epic fantasy series.

In this game of tense negotiation and dubious alliances, you and your fellow players become the heads of Great Houses, struggling to manage the Final Empire. Together, you must cooperate to solve myriad problems threatening the world and compete for the Lord Ruler’s favor. Save the empire and the player with the highest score wins. Be careful, though! Should the empire fall, the player with the lowest score wins instead.